"Aftermath" proved to be a major artistic breakthrough for "The Rolling Stones", being the first full-length release by the band to consist exclusively of Mick Jagger/Keith Richards compositions. "Aftermath" was also the first Rolling Stones album to be recorded entirely in the United States, at the legendary RCA Studios in Hollywood, California at 6363 Sunset Boulevard, and the first album the band released in stereo. 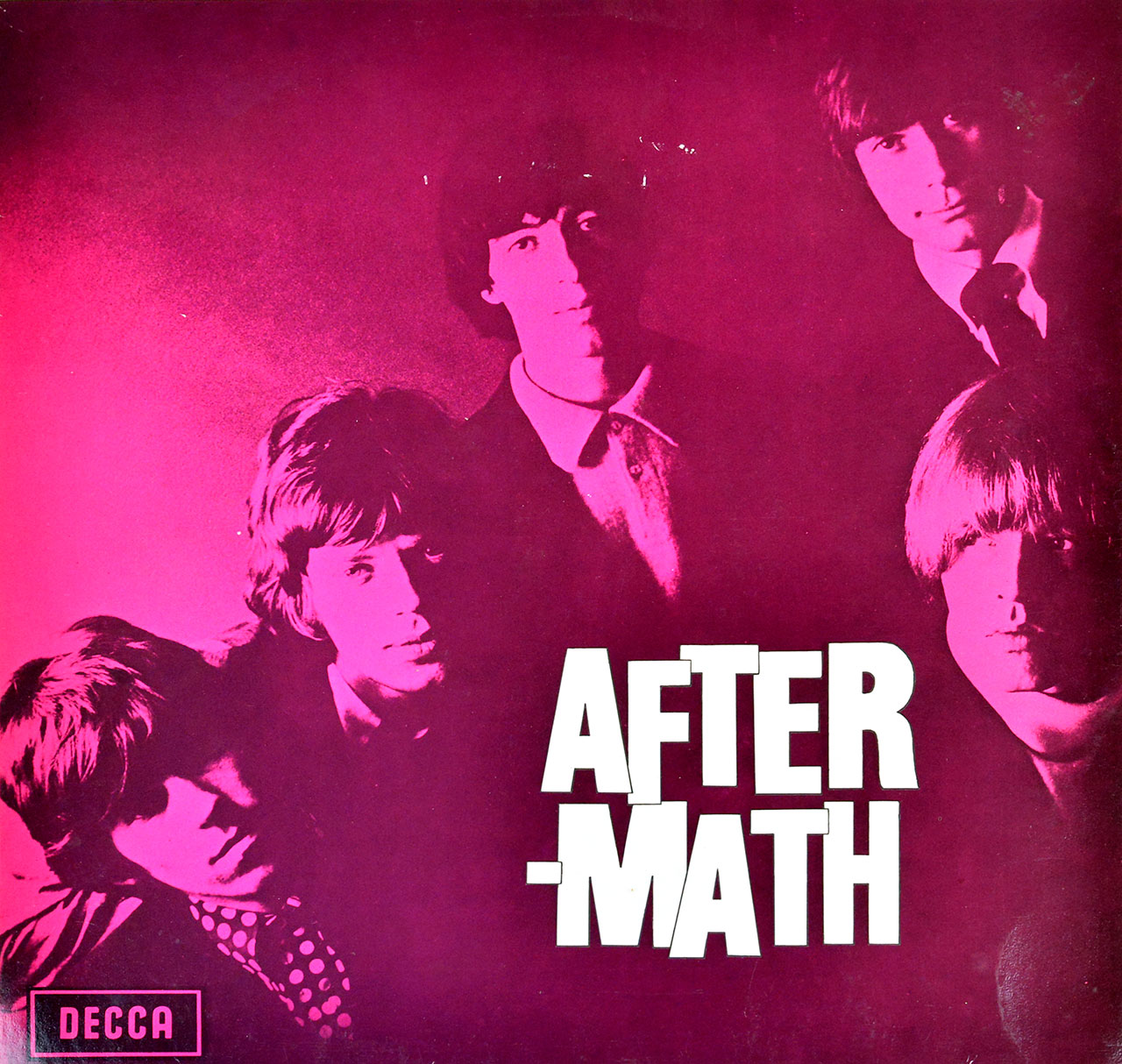 In July 1964, I was engineering a session for Jack Nitzsche at RCA in Hollywood; the song was "Yes sir, that's my baby" In walked the Rolling Stones and Andrew Oldham, who had stopped by to say hello to Jack, a friend they had met thru Phil Spector. In December of 1964, we did our first session together. Andrew had phoned me from England, and wanted to do a session en route to Australia. I was thrilled; since then, we have worked together thru "The Last Time"; "Satisfaction"; "Cloud"; "Breakdown" and a number of albums, in a way that has been rewarding both artistically and professionally, for working with the Stones is extremely exhilarating. They never go the easy route; from the moment Mick and Keith run a song down to the rest of the group, to Brian deciding on an acoustic or electric guitar, or something more bizarre, to Bill sorting out a bass pattern, to Charlie laying down the tempo; to their friend Jack Nitzsche (always on the dates) or Road Manager Stu (Ian Stewart) picking out chords on piano, organ, harpsichord or anything else that happens to be lying around. To some many hours later, at a final take, it's all great. In this business of dubious standards

it's been great working with the Stones, who, contrary to the countless jibes of mediocre comedians all over the world, are real professionals, and a gas to work with. 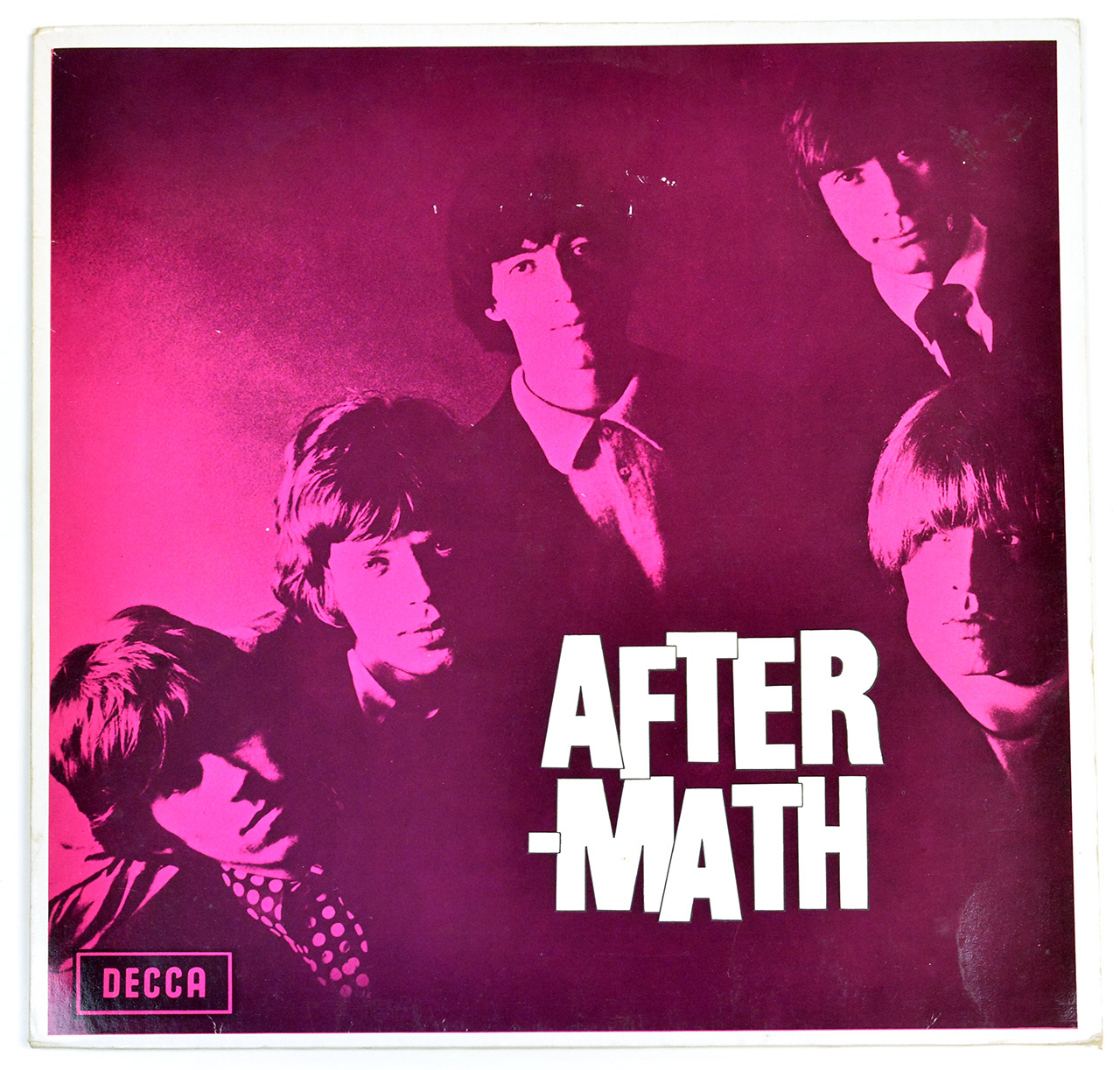 Photo Of The Back Cover ROLLING STONES - Aftermath DECCA NETHERLANDS 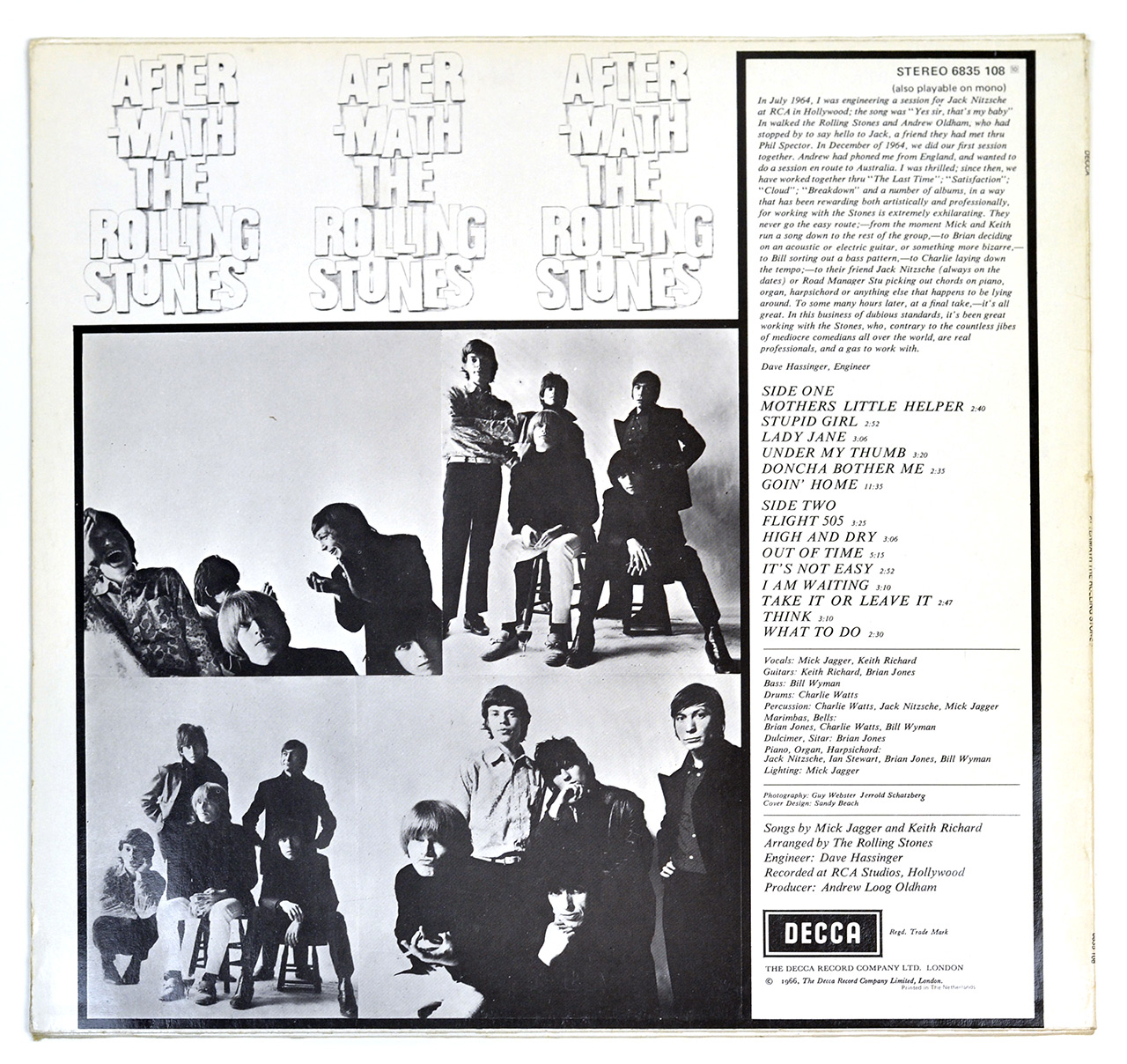 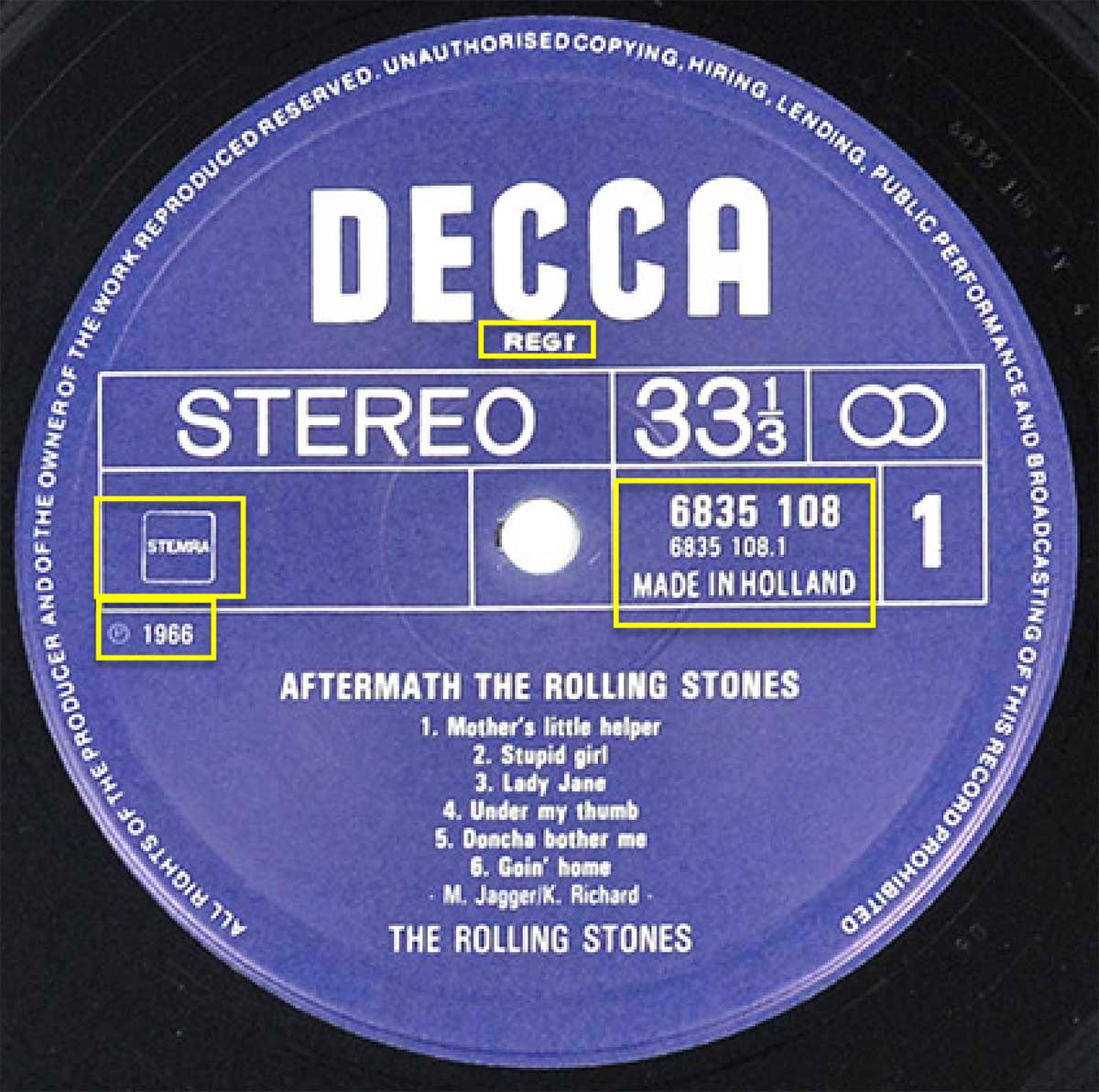 Photo of Side One ROLLING STONES - Aftermath DECCA NETHERLANDS 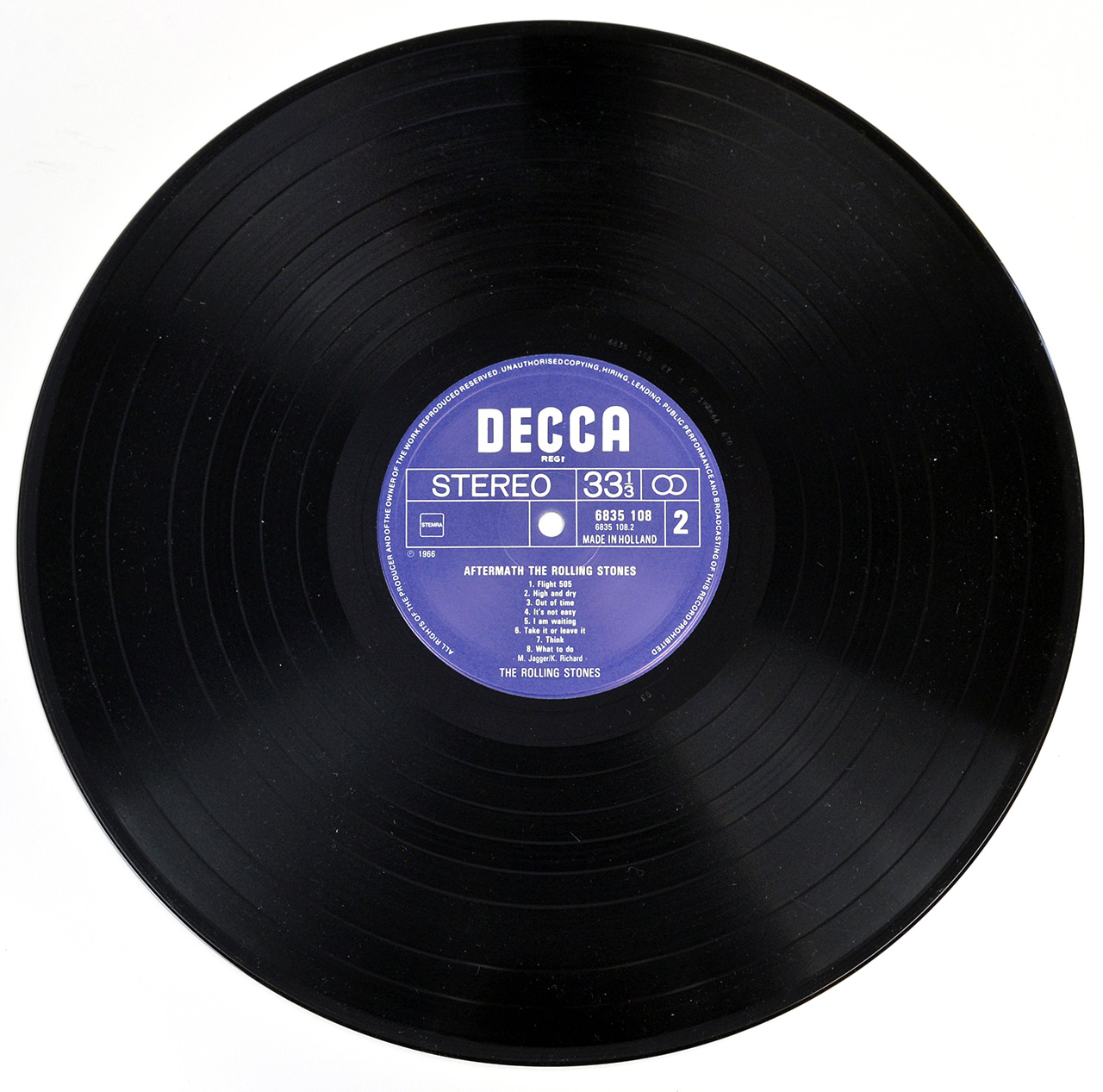