This is the first Roadrunner Release of "Hell Awaits", the second studio album by the American thrash metal band Slayer.

The band's previous release, "Show No Mercy", became Metal Blade Records' highest selling release; as a result, producer Brian Slagel desired to release a second Slayer album. To that end, Slagel financed a recording budget (Show No Mercy was paid for by band members) and recruited several experienced producers to help in the studio. 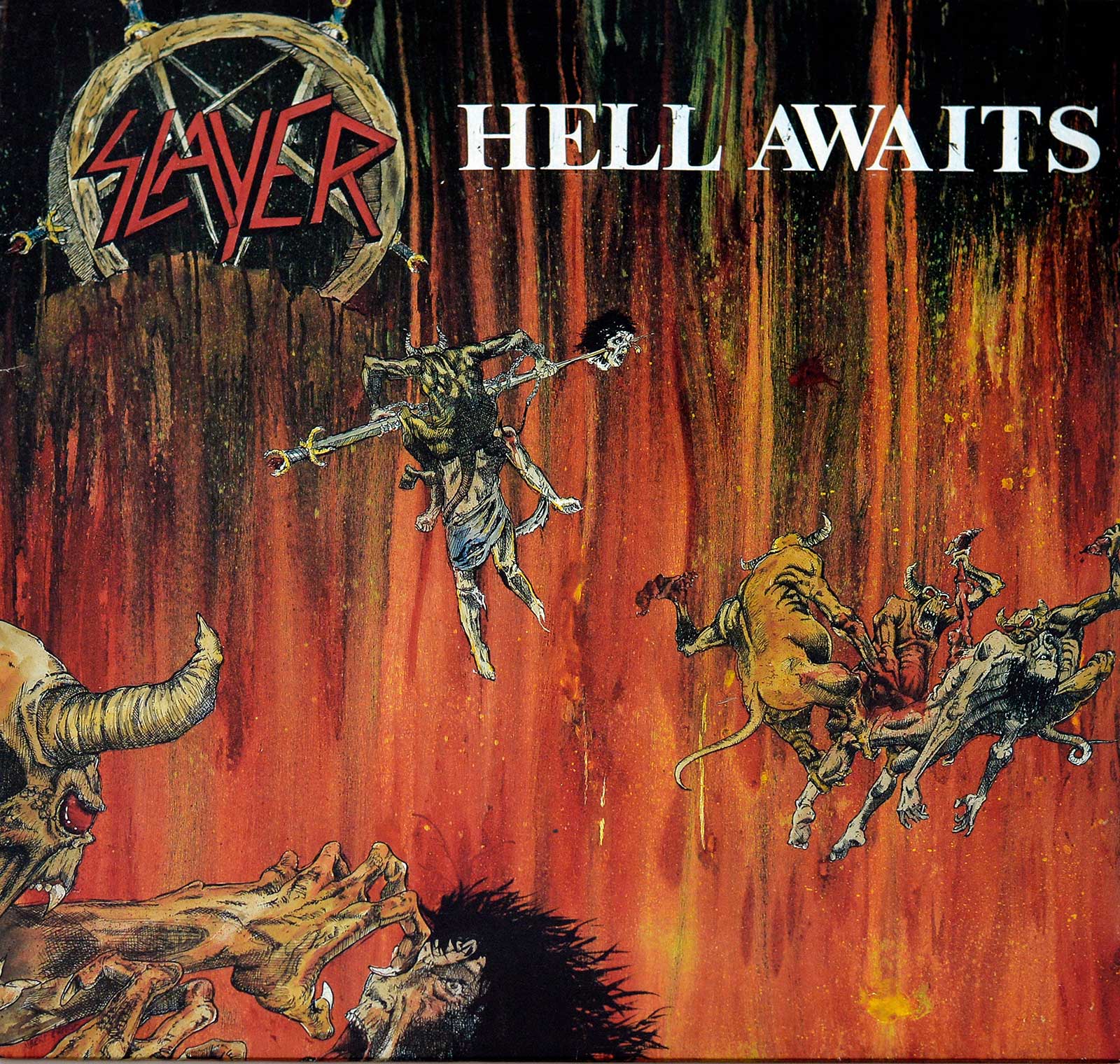 This album includes the original custom inner sleeve with album details, complete lyrics of all songs by Slayer and photos of the Slayer-band.

This album "SLAYER HELL AWAITS NO BARCODE" includes the original custom inner sleeve with album details, complete lyrics of all songs by and artwork/photos

The album: "SLAYER HELL AWAITS NO BARCODE" was produced by: Brian Slagel and Slayer:

Brian Slagel is the founder and CEO of Metal Blade Records. Slagel is known for giving Metallica their first break in 1982, with an appearance on Metal Massacre, a compilation album on Metal Blade, and has since released seminal albums by Slayer, Mercyful Fate, Cannibal Corpse, Fates Warning, Amon Amarth and The Black Dahlia Murder, among others. Use this link to access a list of heavy metal albums produced by Brian Slagel during the 1980s

Carolyn Collins started her sound engineering career with Omen's Battle Cry as one of the first projects in which she participated, in 1985. She was recruited by Brian Slagel to participate in the sound engineering of Slayer's Hell Awaits album and has worked at the Eldorado Studio, Hollywood, Los Angeles.

This album was recorded at: Eldorado Studios, Hollywood, USA

Eldorado Studios is a music recording studio in Hollywood, Los Angeles, USA and has been used by the Heavy Metal bands like: Anthrax, Omen and Slayer 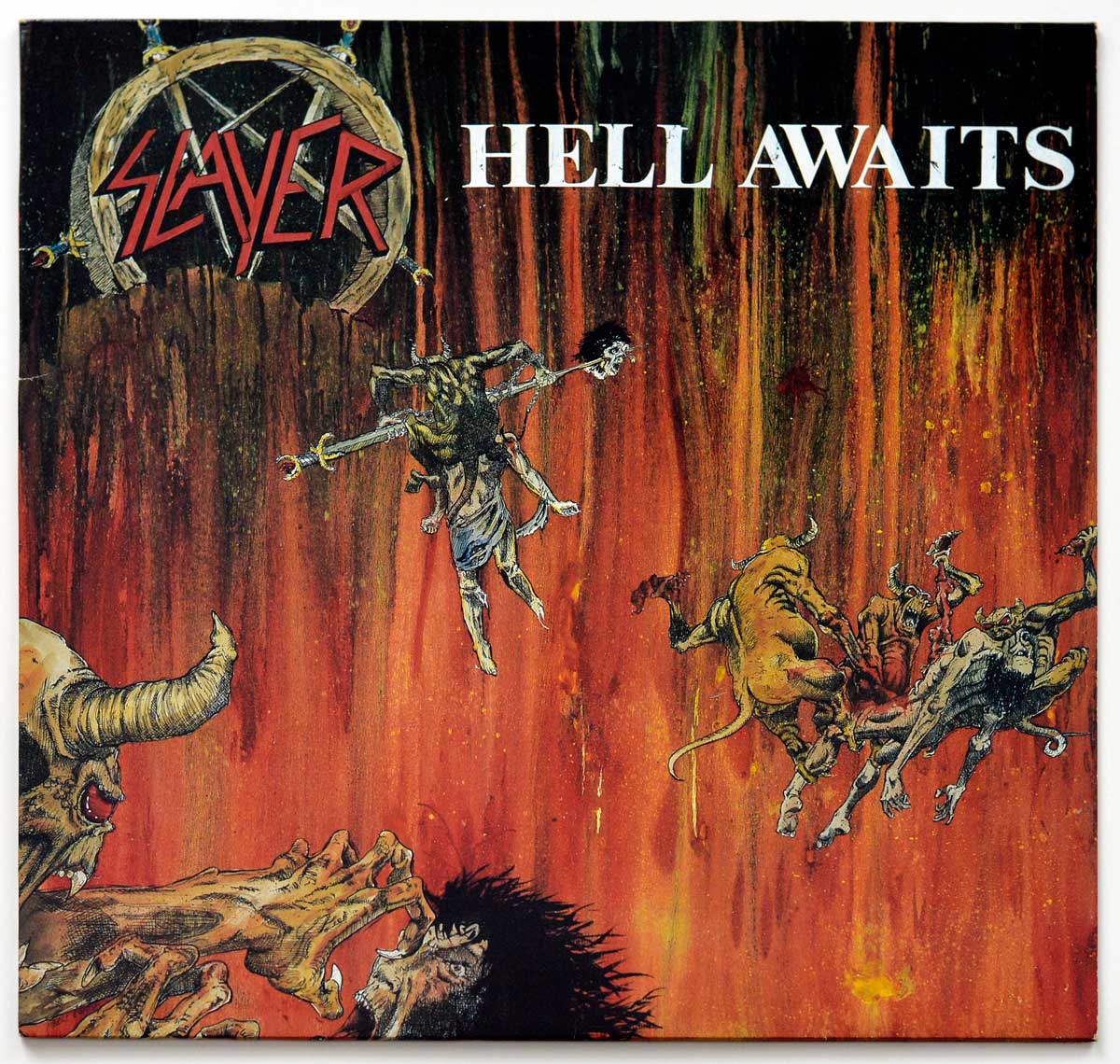 Photo Of The Back Cover SLAYER HELL AWAITS NO BARCODE 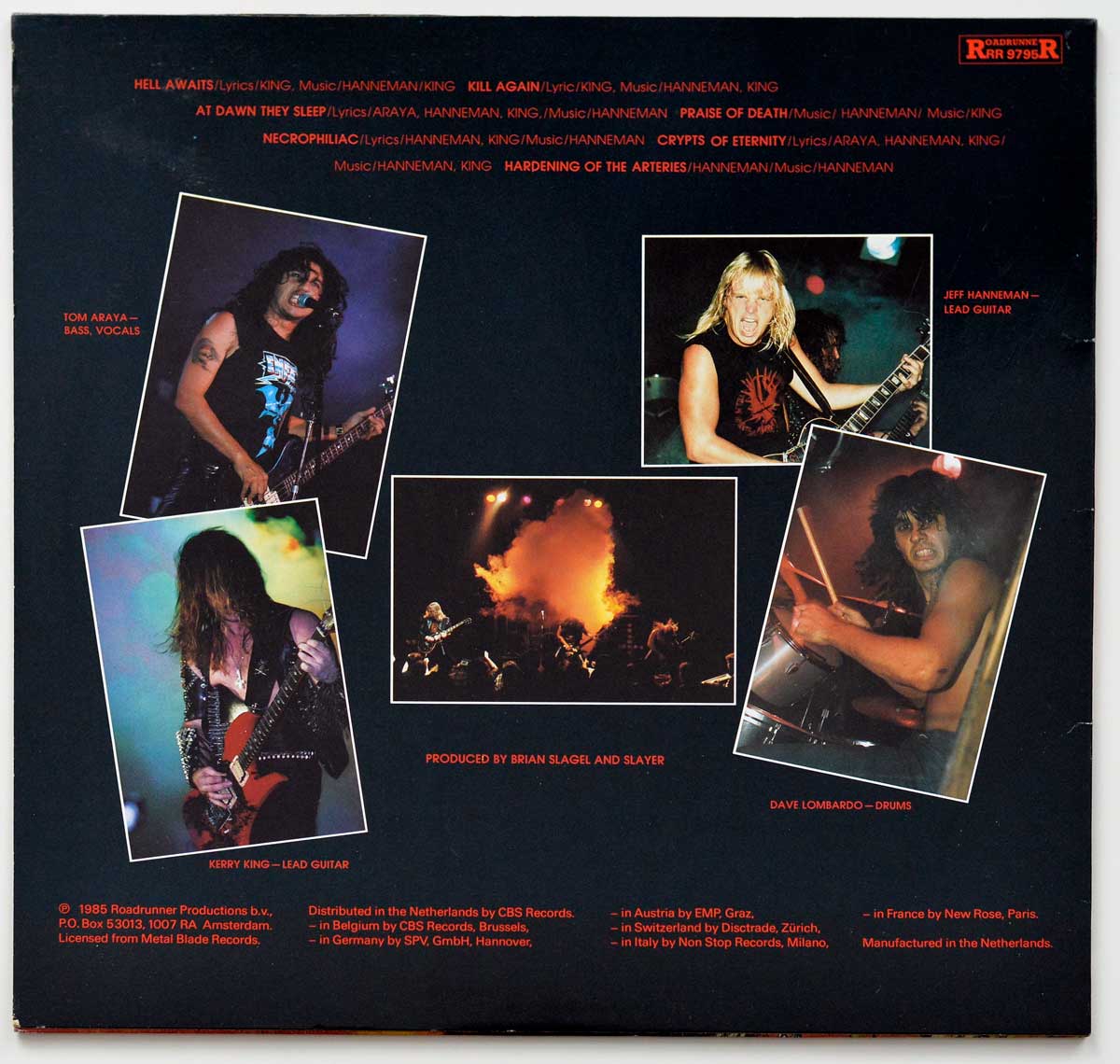 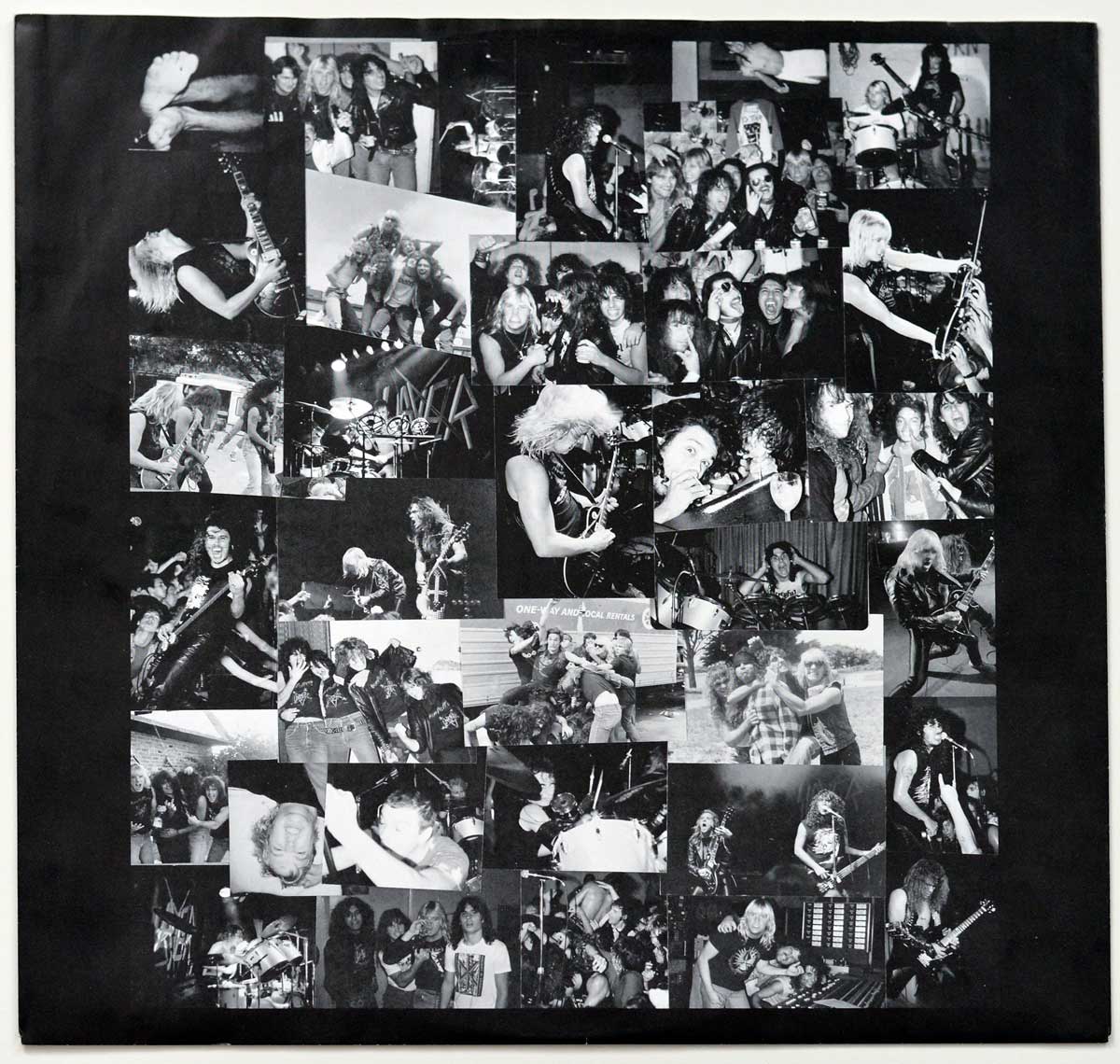 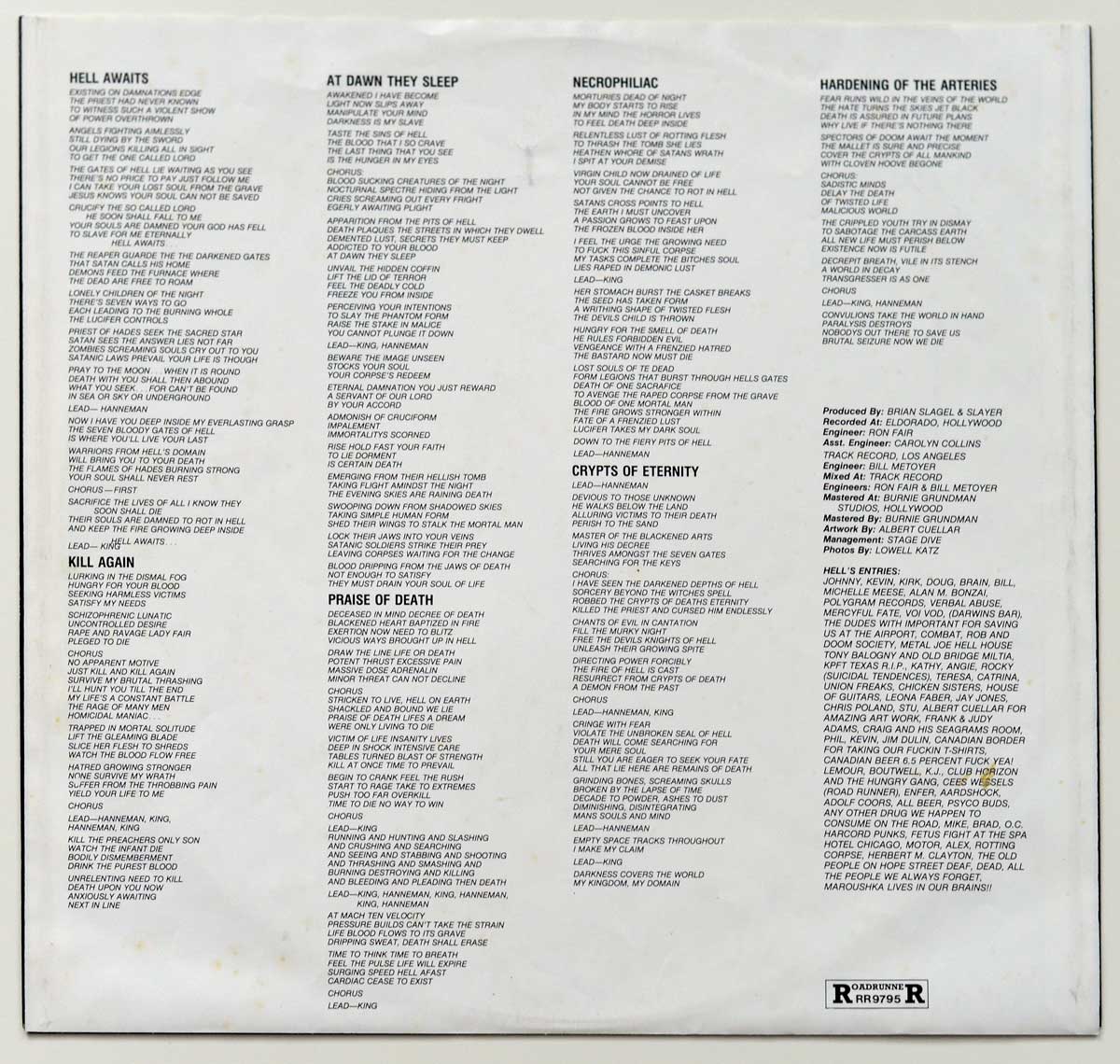 Photo Side One SLAYER HELL AWAITS NO BARCODE 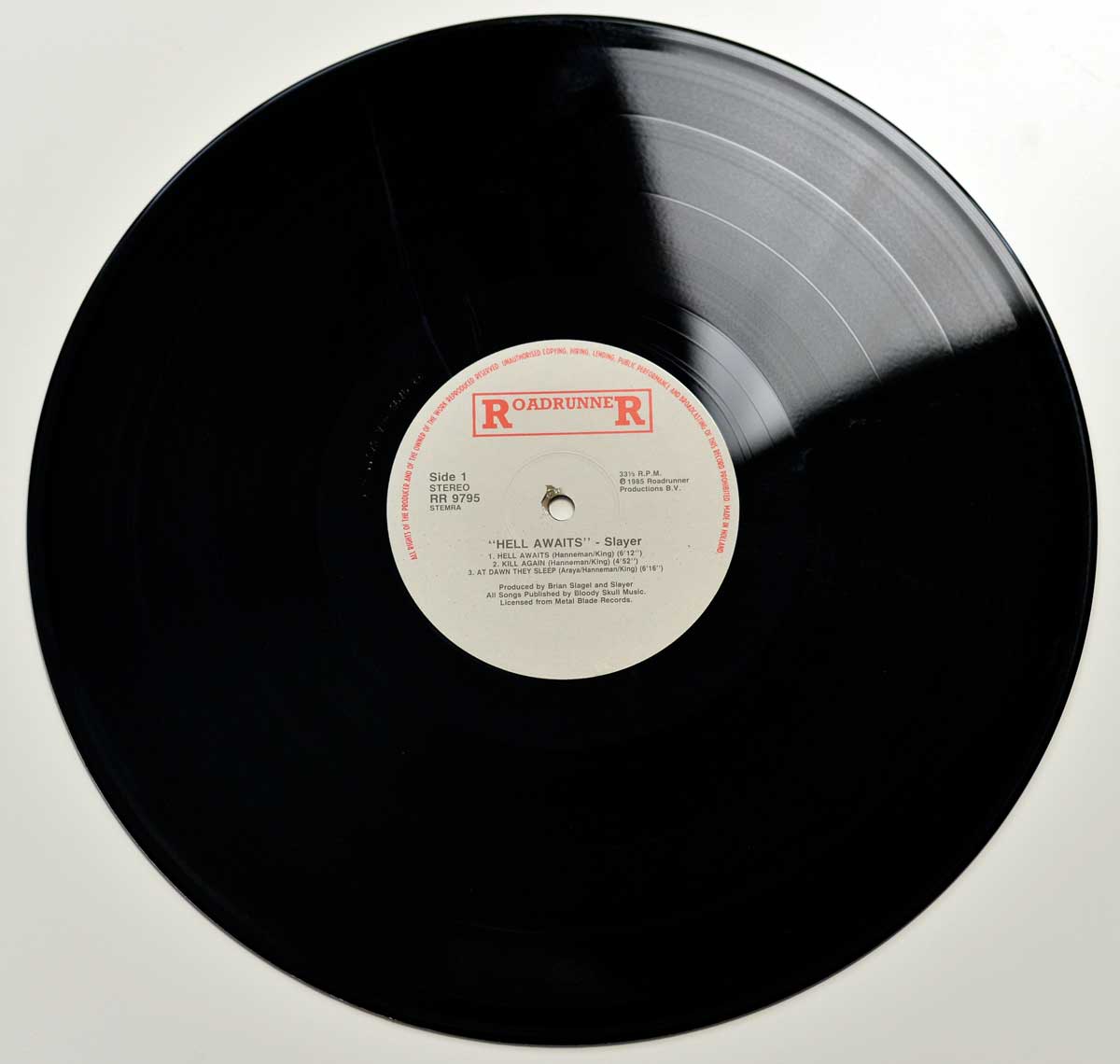 Photo of Side Two SLAYER HELL AWAITS NO BARCODE 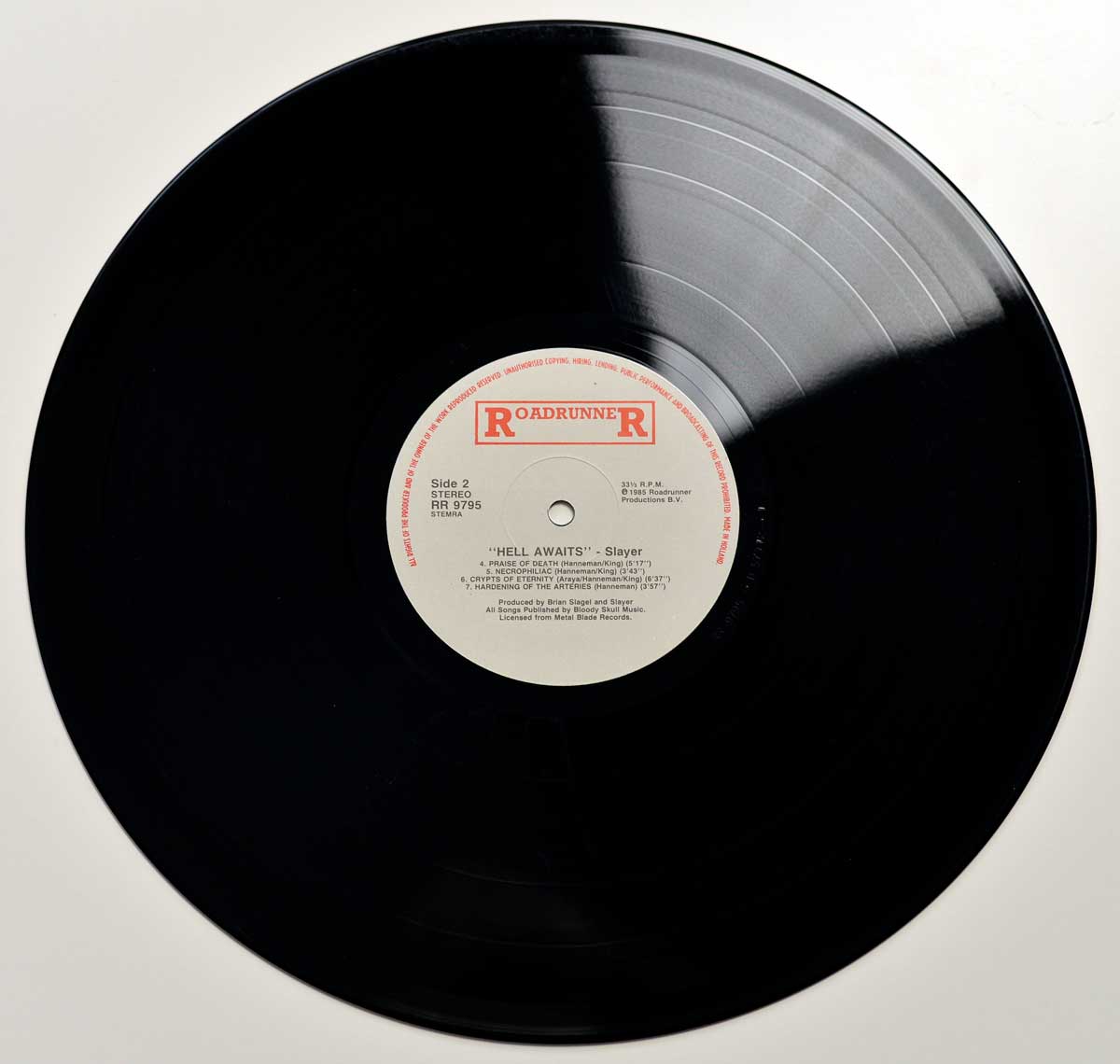