Description: This album "RORY GALLAGHER - S/T Self-Titled Pickwick" is a selection of some of Rory's best performances 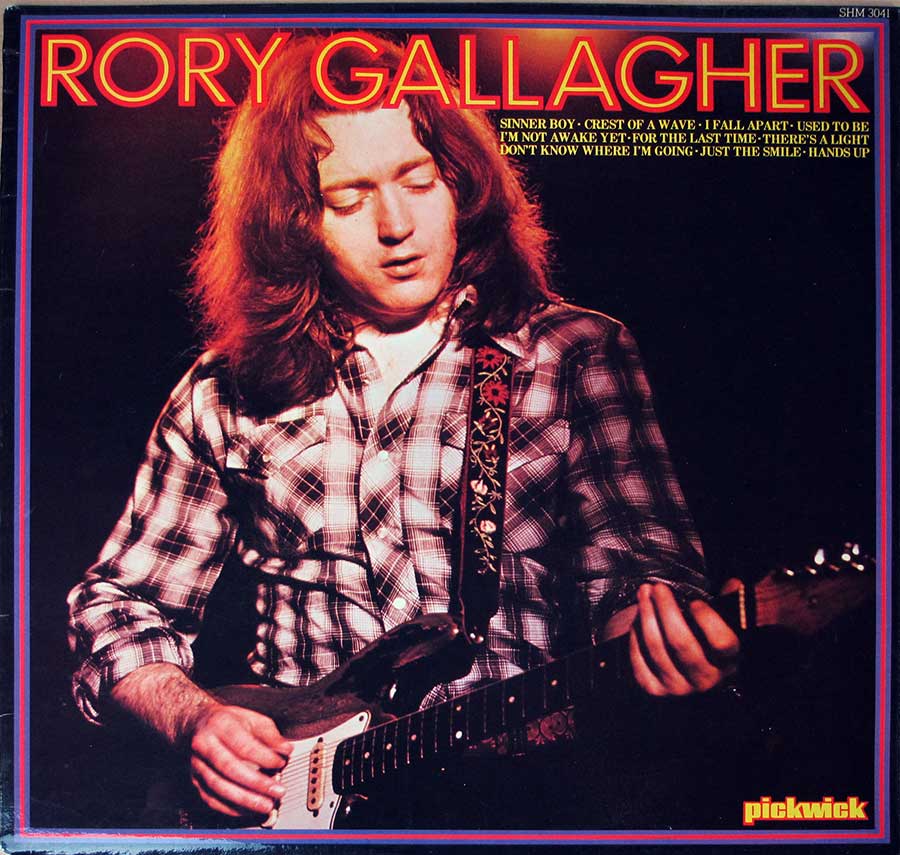 Rory Gallagher is acknowledged as one of the finest musicians treading the boards: a guitar virtuoso and among the finest slide players in the world, he has received the rare accolade of being invited to play with the people that he regarded as his own seminal influences, like blues master Muddy Waters, rocker Jerry Lee Lewis, British skiffle pioneer Lonnie Donegan and Albert King.

Playing music has always been Rory’s main love. As a youngster his heroes were Lonnie Donegan, Eddie Cochran, Buddy Holly and Chuck Berry. His two and a half years with the Fontana Showband, (later renamed Impact), allowed him to play some of the good gutsy sounds he always wanted to play, interspersed with the Top Twenty material and the folkish country and western ballad much loved and often crooned in Irish ballrooms.

After the start with the Showband, Rory formed the legendary Taste. With Taste, Rory's style and sound began to develop as he had a chance to play the music he always wanted. The group produced two albums and became popular throughout Europe achieving album chart success and showing well in the music polls

In the early part of 1971, Rory formed a new band around him with fellow Irishmen Wilgar Campbell on drums and Gerry McAvoy on bass. The first album, entitled “RORY GALLAGHER" (CHR 1258), was a clear indication that he had created his own brand of blues/rock. Two albums followed with the. same line-up, “DEUCE” (CHR 1254) and “LIVE IN EUROPE” (CHR 1257), the latter earning Rory his first gold album.

Several tours of the States in the early seventies consolidated Rory’‘s sucess there and it was at this time that the band was joined by two previous members of “Killing Floor", . . Rod De’Ath (replacing Wilgar Campbell on drums) ‘and keyboard player, Lou Martin. .

Rory's albums, “BLUEPRINT” (CHR 1253) released in February 1973 and “TATTOO” (CHR 12859) reléased later in the year, brought him further worldwide acclaim. The release of his double album, “IRISH TOUR '74" (CTY 1256) captured on record the raw and earthy blues which Rory so brilliantly played on stage, and Film Director, Tony Palmer took a film crew on tour with the band and produced a full-length feature film: Irish Tour '74.

In late 1975 Rory signed a new recording contract with Chrysalis Records. Within a month af gigning, the debut album, “AGAINST THE GRAIN” (CH:1038), was released, followed in late '76 by “CALLING CARD" (GHR 1124). Then in ‘78 Rory changed his line up and returned to a trio bringing in Scottsman , Ted McKenna on drums and Gerry McAvoy on Bass. He headed to Dieter Dierks Studio in Germany, where he produced “PHOTO FINISH” (CHR 1107), returning again to the same studio one year later, Rory recorded his biggest seller to date, “TOP PRIORITY “ (CHR 1235). 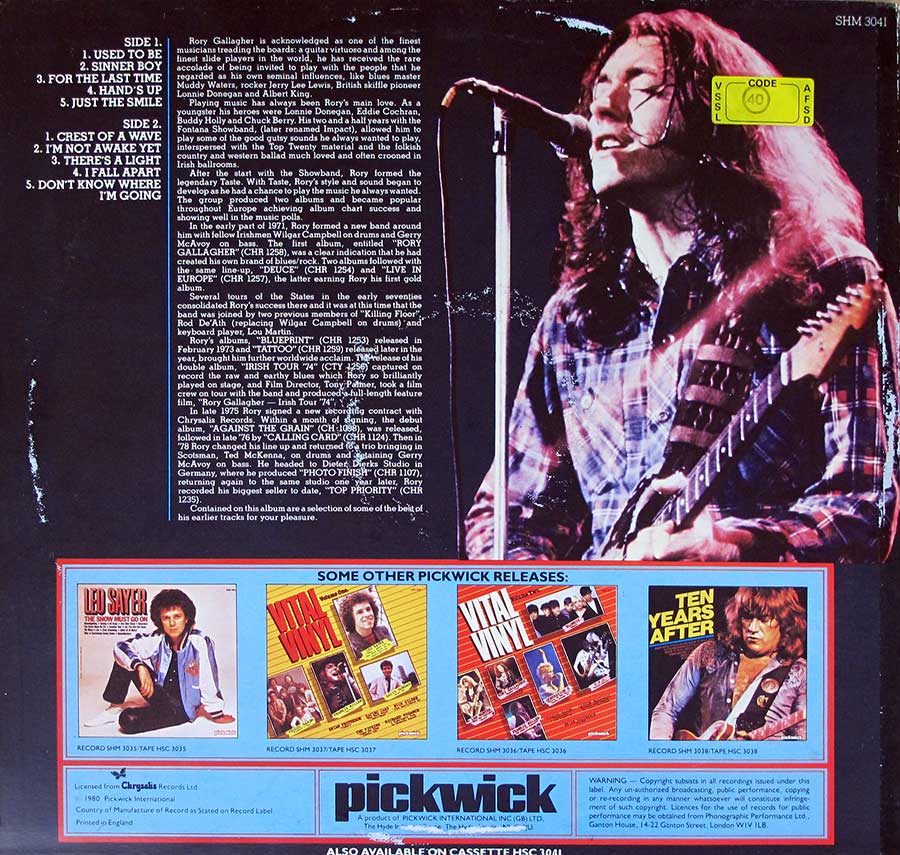 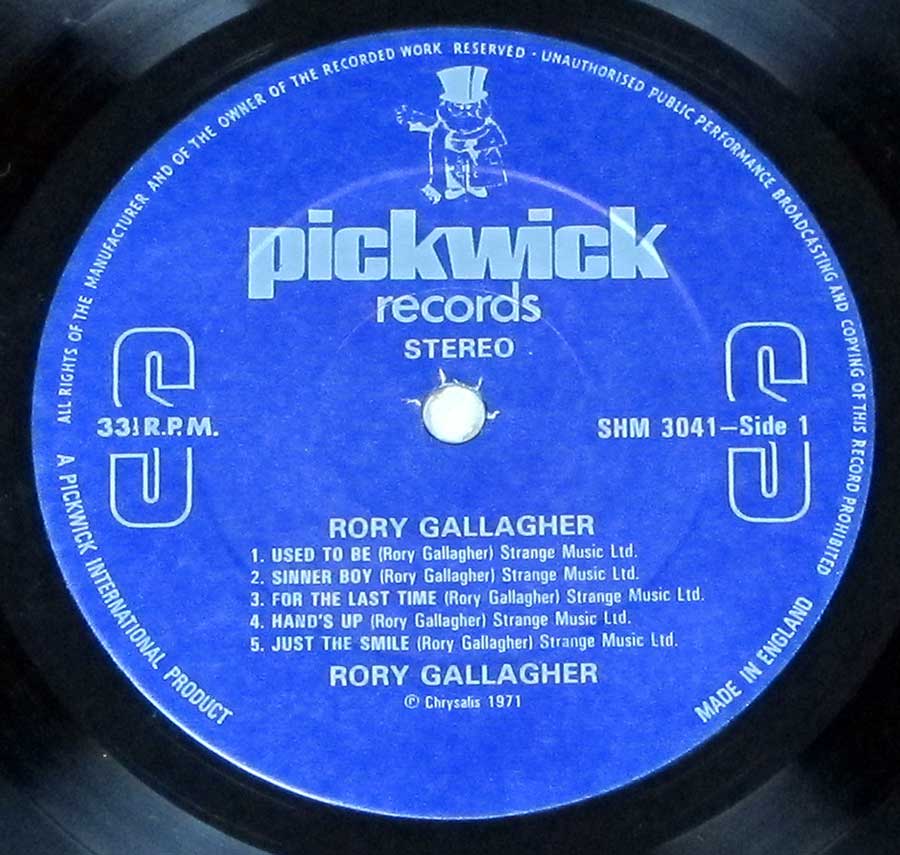