The YELLO band was originally formed by Boris Blank (keyboards, sampling, percussion, backing vocals) and Carlos Perón (tapes) in the late 1970s. Dieter Meier (vocals, lyrics), a millionaire industrialist and gambler, was brought in when the two founders realized that they needed a singer. The new band name, Yello, was chosen as a pun based on a statement made by Dieter Meier, "a yelled Hello". Yello's first release was the 1979 single "I.T. Splash". The LP Solid Pleasure, featuring the hit dance single "Bostich", was released in November 1980.

In 1983, Yello received substantial media attention with the release of "I Love You" and "Lost Again". Perón left the band in 1983 to start a solo career. With their 1983 album You Gotta Say Yes to Another Excess, the band began a working relationship with Ernst Gamper, whose "corner cut" logo would represent them for three albums, and who would design covers for the group beyond the demise of this logo.[citation needed] 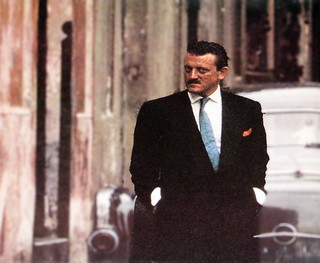 On the discography listing below you will find YELLO ( Pop , Switzerland ) vinyl records released during the 1980s. For each record you will have the record companie's catalognr, album title, year and country of release. Complete information for each record can be viewed by selecting the corresponding links. Albums have been ordered in ascending alphabetical order of the album titles.