The artwork / illustration on the front cover of "Ahead Rings Out" shows a pig's head wearing sunglasses, headphones and smoking a cigarette.

"Ahead Rings Out" was the debut album by British blues-rock band Blodwyn Pig, released in 1969. The band had been formed in 1969 by Mick Abrahams, the former guitarist of Jethro Tull, and sales of Ahead Rings Out rivalled those of Jethro Tull's next album, "Stand Up", reaching No. 9 on the British album chart. The album contains a healthy mixture of various styles of progressive blues and "The Modern Alchemist" displayed the jazz influence and saxophone skills of Jack Lancaster. 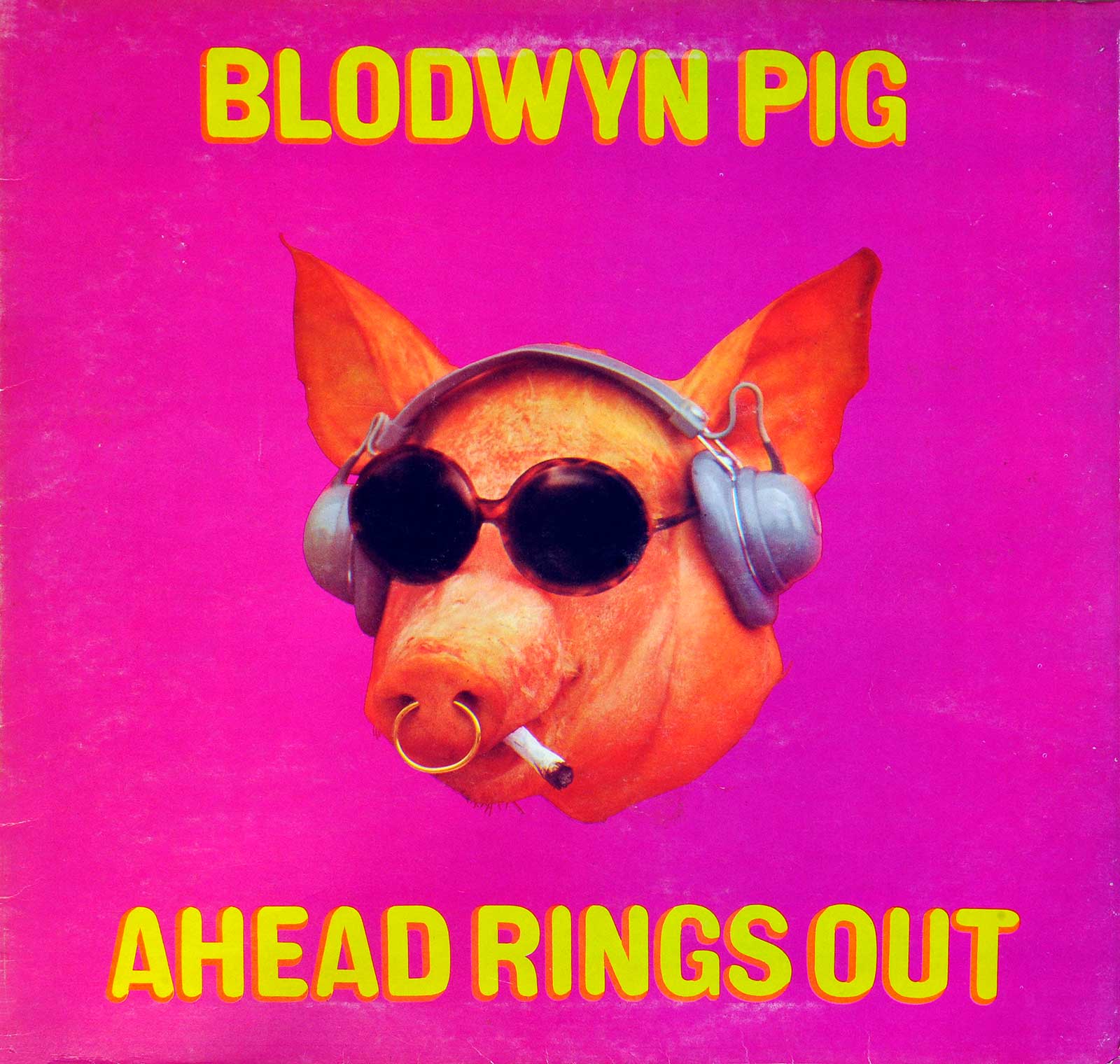 Transcript of the Liner Notes

Below is a transcript of the Liner Notes ( Mick Abrahams - Jethro Tull, Blodwyn Pig, Screaming Lord Sutch ), the first paragraph giving instructions on how to deal with the album cover and record, should you dislike these. Followed by a summary on how each song was created.

To start these cover notes let me say that if the album sleeve does not appeal to your taste, take a pair of scissors and cut in a straight line down the centre fold, open record insert fully and there you have two gay party hats. After you've had your party (you rascals I knew you would) place record in the player take a large hammer and in a fit of frenzied anger completely destroy the record, (take extreme care not to damage player) this task completed, go straight to your record dealer and buy another, which ensures one more sale and probably relieves a lot of tension on your part. Anyway not to worry they'll find a cure for us someday, and in the meanwhile I will endeavour to explain the album in my best fashion.

"It's Only Love" Features a heavy brass sound (two tenors, one baritone and one soprano to be exact) which drives the whole thing along steadily. Has an interesting solo on soprano and tenor played simultaneously (and together) by Jack who arranged the parts and played all the aforementioned instruments by dubbing the parts over the initial track, thus creating the overall effect of a small brass section. The main reason for this being, we couldn't afford session men and Jack is silly enough to do anything you tell him, like the time we told him to take his trousers off in Piccadilly. But never mind, he's out again now and playing some fine music.

"Dear Jill" is a pleasant contrasting blues, played on 7 string slide guitar and has a warm soprano solo from Jack. (Music for young lovers to argue by).

"Sing Me a Song That I Know" Has the quality of hard rock and blues with heavy accentuation on drums and bass from "vulture" Ron Berg and "budgerigar" Andy Pyle. Vocal from yours truly who thought he was Elvis Presley at the time. (A song to squash budgies by).

"The Modern Alchemist" Completely self-explanatory. Reflects the writer's personality. Fast, furious, and utterly insane. End part is a slow passage for guitar and tenor. (A ditty to hit your wife on the head with a lump of wood by).

"Up and Coming Yes"", it's been a hard road, folks, the Rolls has broken down again and there's only £500,000 left in the bank. Yes people, that's why we got the blues because we ain't had nuttin but troubles, ducky, know what I mean. (Blues strictly for upper class people and M.P.S).

"Leave It With Me" Dedicated to our dear, kind, handsome manager whom we are raffling off to pay for the cost of making this record. Tickets at your local record dealer £100 each. He's a good manager. A driving bass solo from the boy pratt Andy and some very solid drumming from Ron. (If played backwards could prove a new cure for neurotic parrots).

"The Change Song" Was written during my last pleasurable holiday as a guest of Her Majesty. It implies a change of heart which is certainly true as I don't intend to get caught doing it again. I sincerely think they should make it legal instead of having to steal things like that from honest people's washing lines. (Music to clean your cell out by).

"Ain't Ye Coming Home, Babe?"" Heavy 6-8 vocal line leads into a long 4-4 passage for soprano sax and guitar. For best results when listening to this number dip your head in a large bucket of red paint, dial 999 and run gaily into the street stark naked, shouting death to the evil trouser-worm and all his wicked accomplices. After which you will be taken away to where we all live, which is not really surprising, is it ?

Many thanks to Andrew Johns who produced and engineered the session and proved to be an extremely pleasant and patient person (he didn't bat an eyelid when we hung the studio caretaker). Thanks to his tireless assistants, Robin and John. Thanks to our roadies for fetching us fish and chips and tea. Thanks to everyone in fact for just putting up with us.