This album is a live documentary of a night at a San Francisco dance concert. Recorded live at California Hall in San Francisco - 28 July 1966. Cover art by Stanley Mouse. Liner Notes by David Getz 1983

Before we all lived together we rehearsed every day in an old loft on Henry Street. Mouse and Suzi Perry lived there and while we practiced Mouse and Kelly would be doing the posters for the weekend dances at the Avalon. How they could work with a thousand people hanging around always amazed me. Coming and going was a loose knit group of people called "the Family Dog," many of whom were crazies from Detroit.

They were our audience and we were their band. James was from Detroit. He said that his first job at fourteen was being a human hood ornament on his father's car in the "Thrill Show". He would be mounted horizontally on the hood with his head out in front; the car was then driven at high speed through a wooden wall of fire. The first time he was a little scared and moved over so slightly just before impact and almost broke his neck.

Later he learned to keep his head perfectly straight and didn't feel a thing. Our first logo was the Indian God's Eyc. Cindy, Peter's wife, made a little silkscreen and printed God's eyes on leather with our name. They were just chunks and odd shaped scraps of shoe leather; we handed these out to our friends. Then we went to putting out stickers and but-tons.

Everyone had buttons in those days. The stickers were square yellow things with the god's eye; that was our idea of publicity. Our first interview was in the "Mojo Navi-gator", a very underground newsletter. In it we put down the Fillmore; Janis said it was full of sailors looking to get laid. We agreed that the Avalon — where we played a lot — was the more happening place.

A week later Bill Graham — who had read the interview — threw Janis out of the Fillmore just as she was coming in up the front stairs She was wired and was taken completely by surprise. It was a scene; both she and Graham screaming and cursing each other at top volume. Janis always started screaming when she was taken off guard.

Janis had come out from Texas to join us in June. When she first started singing with the band, some of our hardcore fans did not like her. They saw her as a distraction from our unique "freak-rock" sound. From the rest of us, there was immediate acceptance — an instan-taneous recognition that she was great and that we were all plugged into the same socket.

It just was. But in those first few months some people actually said to us, "get rid of the chick". One day we all piled into a car, drove over to Marin, picked up a newspaper and looked up 'Houses for Rent'. That same day we found a big house in the little town of Lagunitas and rented it for three hundred a month. It was a beautiful day.

Everything seemed to work out right. Nothing could go wrong; God takes care of its perfectly. I'd taken psylicibin. The house was at the end of a road way back in the woods with no other houses around it. On the big butane tank coming up the driveway someone had scrawled "God is alive and well". Later another had added "In Argentina". Eventually the house became known as "Argentina".

Peter and Cindy and their baby Lisa took one of the bedrooms upstairs, James and Nancy and their baby, Hongo, took the other. Janis had a lovely sunlit room like a porch which she decorated with plants. Like the room she became her most peaceful and beautiful self during that time. I lived in a funky space in the back of the kitchen.

I liked that it became the favourite hangout. Sam and Rita moved into a tiny cabin out in bsck. They were always getting high and getting i m. They were lovestruck, inseparable and on never-ending honeymoon. Sour the inevitable conflicts began. Peter and Cindy liked cleanliness, regular meals and a bit of order. Nancy and Rita were into drugs and staying up all night stringing beads and general anarchy.

Nancy in particular was one of the original free-spirits and believed in letting her son, as well as everything else in the house and universe, run free. Add to all this mishka, James and Nancy's german shepherd — a big, neurotic, whining, barking animal that was constantly chewing or chasing something. You knew that it couldn't go on for very long.

The Dead and Quicksilver were both living within two miles and we had one great rock and roll party there. We cooked up a mess of food, bought a few cases of cheap wine and rolled a hundred joints from a big pile of grass that had been found growing in Nebraska or some place. The inner sanctum of the San Francisco rock scene showed up. Everyone jammed together; six or seven guitars at once.

Probably a couple of hundred people came and went — all night and into the morning. At dawn people were all over the place, coming down from this, waking up from that. Someone had brought a goat with them; there was goat shit all over the house and it had eaten half of my bedspread. Big Brother, with all its' wives, lovers, children and pets lived there together until the end of 1966.

During that time we rehearsed almost every day and sometimes after dinner too. Get-ting better, tighter and more integrated as a band was our top priority. By the time we simultaneously but separately all moved back to the city we had developed some musical muscles. Also, we'd become somewhat of a family of brothers and sisters; despite the dis-putes and the different personalities, we loved each other.

Together, I think we felt more ready to take on the world. The music on this album is truly a record of that time of incubation and innocence. 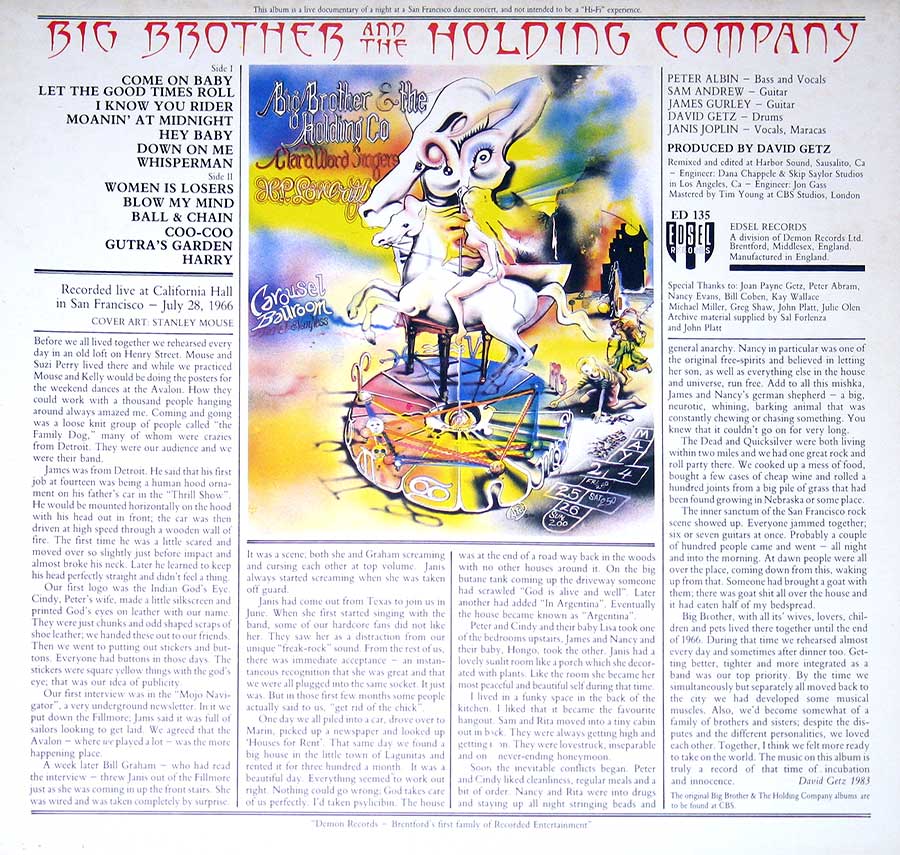 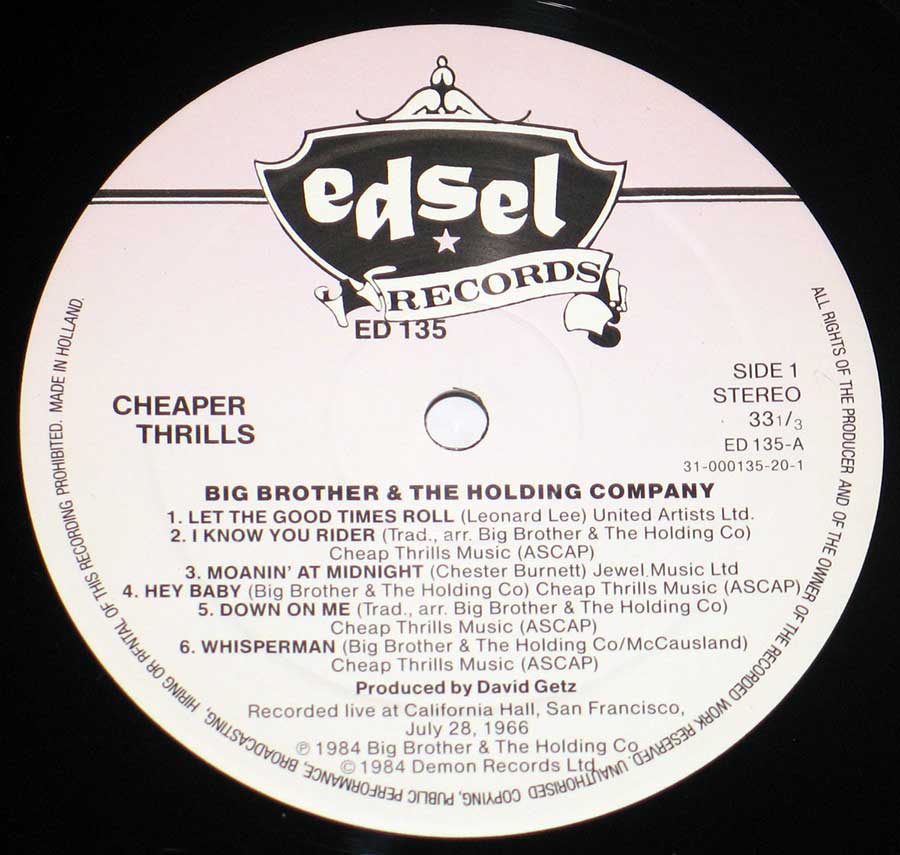