"Children of the Revolution" is the 1972 song by the British Rock band "T.Rex", is was used as soundtrack for the movie "Born To Boogie"

"Children of the Revolution" was written by Marc Bolan and released in 1972. The song was released as a single, and reached #2 on the UK Singles Chart. It was also included on the band's album "The Slider."

The song is known for its catchy, upbeat sound and its political lyrics, which were inspired by the counterculture movement of the 1960s and 1970s. The lyrics speak of revolution and change, and call on the "children of the revolution" to rise up and make their voices heard.

The song was written during a time when T. Rex's music was becoming more political, and it was one of the band's most popular songs at the time of its release. The song has been covered by several artists over the years and remains a classic of T. Rex's discography.

Description: T. Rex, also known as Tyrannosaurus Rex and later as T. Rex, was an English rock band, formed in 1967 by singer-songwriter and guitarist Marc Bolan. The band was known for its unique blend of rock, folk, and psychedelic music, and for its flamboyant stage performances and Bolan's distinctive voice and songwriting.

During the band's early years, it was known as Tyrannosaurus Rex, and featured Bolan and drummer Steve Peregrin Took. Took was later replaced by Mickey Finn, and the band changed its name to T. Rex in 1970. The band's 1971 album "Electric Warrior" was a commercial and critical success, and featured hit songs such as "Get It On (Bang a Gong)", and "Jeepster". The album reached #1 on the UK Albums Chart and the band became one of the most popular acts in Britain.

T. Rex's music was a major influence on the glam rock movement of the 1970s and Bolan's fashion sense and stage presence were also an influence on many other artists. The band released several successful albums and singles and were known for their energetic live performances. The band disbanded after Bolan's death in a car accident on September 16, 1977.

"Children of the Revolution" is the 1972 song by the British Rock band "T. REX", is was used as soundtrack for the movie "Born To Boogie"

"Electric Warrior" is the second album by British rock group T. REX, and is widely considered to be one of the quintessential glam rock releases.

"Hot Love" is a song by English glam rock act T. Rex, released as a standalone single in 1971. 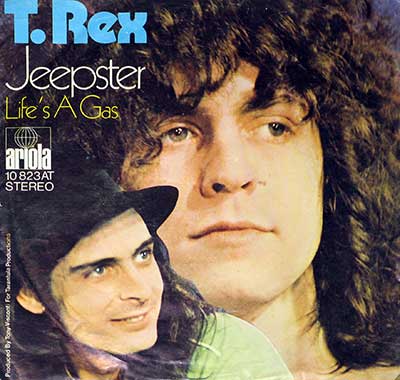 "Jeepster" is a song by English glam rock act T. Rex. It was released on 5 November 1971

"Metal Guru" is a song by the British rock band T. Rex, written by Marc Bolan. It was the band's fourth (and final) number one on the UK Singles Chart