This is the first Dutch release of "The BYRDS - Greatest Hits" and the record label has a solid Orange colour and the CBS "Walking Eye" Company Logo. Later issues of the Dutch release have an orange to yellow colour grading on the label. 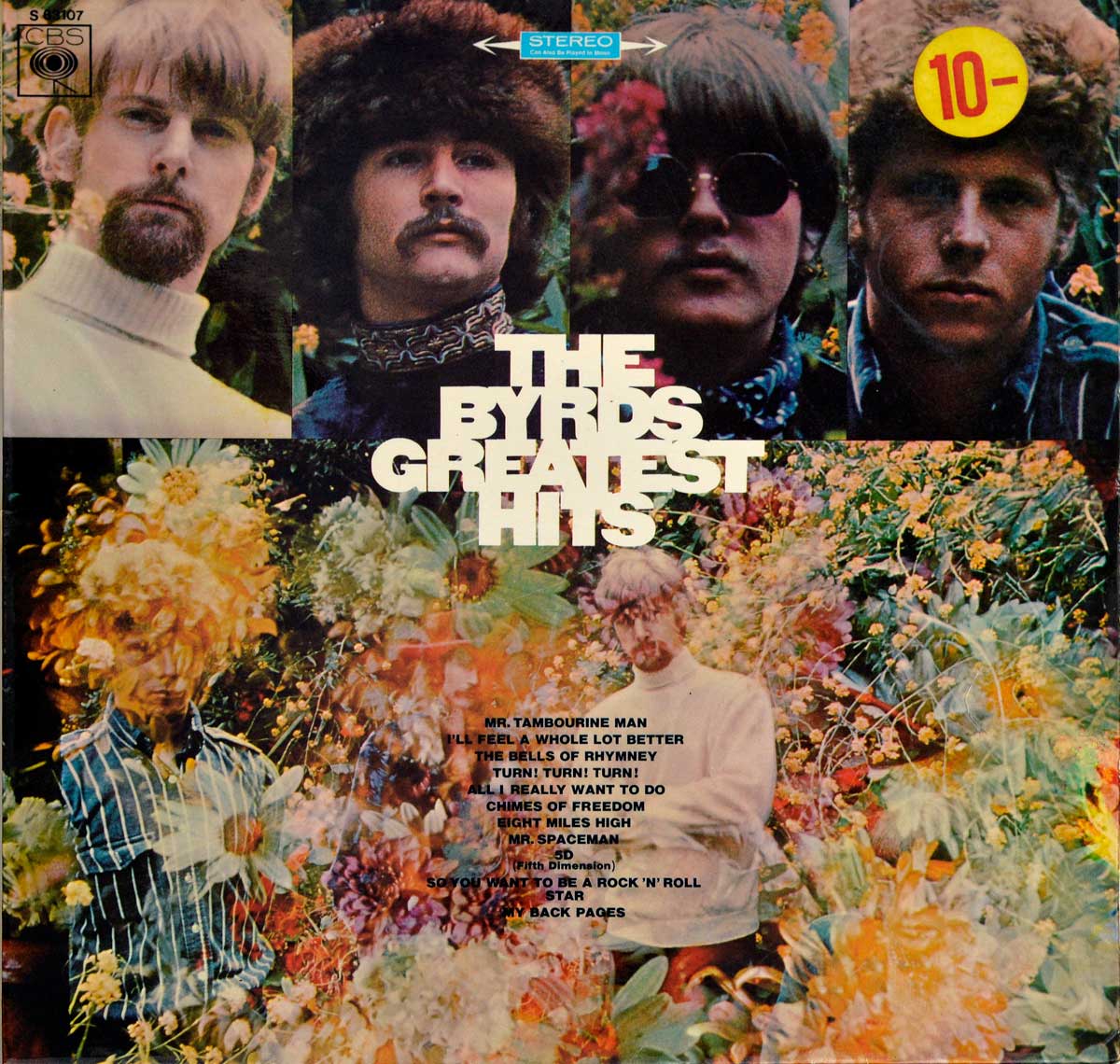 A transcript of the original liner notes by: Dave Swaney, dreaming about the first years of "The Byrds" musical career

Things are happening so incredibly fast. Was it really three or four generations ago that The Byrds came along and helped turn the whole pop music scene around?

Were they conservative then? Or now? Whatever, their thing was beautiful and heavy and will be as it is. Lasting. There will be this big nostalgia binge, and because so many people were part of what happened, and because they were an overwhelming part of a larger renaissance, The Byrds will be revered.

It is too early for that now because The Byrds are still happening and very, very valuable. But it is good to be nostalgic, and necessary to find one's rung, and so much good was the start of so many better things happening and about to happen. So why not?

They were five where they are now four, and all of West Coast hippiedom, which is to say Los Angeles because San Francisco was yet to become as it is, was catalyzed by their sound. The Byrds brought them down from their canyon hideouts, in from their beach shelters, from Big Sur camps—and Mexican co-munes, down from Sierra and Mojave anonymities, to dance and be together and realize how strong their numbers were.

They came in rags and velvet, leather and denim, on foot and motorcycle and in Rolls, boots and chains and moccasins, and the LA press was exasperated and delighted. The Byrds played loud, but with beauty and transcendant smoothness.

The dance floor at Ciro's was jammed. Thousands showed up at The Palladium where an enormous caricature of Lawrence Welk slowly waving a giant baton greeted everyone and the rent-a-cops wondered how everyone could be so happy and have such fun on Coca-Cola and lemonade.

McGuinn made someone a lot of money by wearing those funny-looking Ben Franklin glasses; a wonderfully gentle, thoroughly human man named Derek Taylor began to gather a new circle of friends and admirers with his logical perspective on the nonsense swirling around them, and The Beatles were quoted as saying their favorite American group was The Byrds;

Dylan got on stage with them at Ciro's to blow his harp straight into the dancing melee below as David Crosby smiled benignly at the whole scene; "Mr. Tambourine Man," for those who laughed up their sleeves and for those who dug it straight and would never be persuaded then that anyone could get away with that, made number one.

Then there was the first album and a not-so-successful trip to England. The Byrds were there. Someone in the label department at "Billboard" worked overtime to come up with the term folk-rock so that everyone would know what was going down in case they didn't want to think about it too much.

And it stuck because no one ever had the time to try to change the words or pose an organized "Why?" There was just too much else important happening.

Off the hot streets of Los Angeles, even as other revolutions were finally gaining notice a few miles south in Watts, they would scatter themselves in a darkened studio and bend to the task of reaching into millions of homes, cars, dormitories, coffee shops, bars, bordellos, prisons, camps, insane asylums—minds.

Lots, some because of folks like The byrds, has gone down since. With them and with us. The record herein, if you let it, will tell you a great deal.

About The Byrds, about changes, about yourself. But it's really only a sampler, and the title is only to grab your eye in a busy world. So buy the other four LP's—"Mr. Tambourine Man," "Turn, Turn, Turn,- "Fifth Dimension- and "Younger Than Yesterday"—if you haven't already, because you ought to realize that The Byrds and what they have to say mean a great deal to you.

Sometimes things happen so fast that we lose track of what is really the most valuable.

Photo Of The Back Cover THE BYRDS - Greatest Hits ( Netherlands )

Photo Side One THE BYRDS - Greatest Hits ( Netherlands )

Photo of Side Two THE BYRDS - Greatest Hits ( Netherlands )